Warning: A non-numeric value encountered in /home/customer/www/kevonsaber.com/public_html/wp-content/themes/Divi/functions.php on line 5837

As 10 year-old boy, I came across my mom and dad’s degrees from San Jose State. Mom studied social work; Dad studied management. This was the first time I remember making any connection between school and work. Mom was a social worker; dad ran a small business. It was also the first time I began thinking in a meaningful way about my what I would do when I grew up.

Should I become a social worker like mom or a businessman like my dad?  Despite never thinking or talking deeply about vocation, I had some ideas about my parents’ professions. Somehow I associated social work only with helping people and business only with money.  My best guess is I picked up these naive ideas from cartoons. My parents certainly didn’t introduce these associations nor did they square with what I observed when I visited their workplaces.

I’m reminded of these notions when political elections roll around. Presidential candidates especially remind me of my childish ideas about business and capitalism.

Capitalism’s detractors argue how capitalism is for the few, not for the many, and a “cancer overtaking our planet.” Capitalism’s proponents celebrate how beautiful and perfect it is. Which point of view is correct?

Both and neither.  Capitalism and business are not monolithic ideas. In practice, business people and businesses operate on a spectrum. At their extremes, businesses are essentially destructive or generative.

At the destructive end of the spectrum, a business selfishly pursues its own narrow and short-term interests. The sole purpose of these companies is making money. The modus operandi is to maximize shareholder wealth on a quarterly basis and at any cost. Employee welfare, honoring the company’s commitments to vendors, and environmental stability, are all viewed as optional. In these companies the ends justify the means. In fact, people are viewed merely as means of production.

A purely destructive business is unsustainable because it cannot retain virtuous people and over time is deemed untrustworthy by customers and vendors. In other words, its cost of doing business strips away all profits. This is a feature of voluntary exchange: employees, customers, and investors determine which firms are good for the world and which firms don’t deserve to exist, as they did with Enron.

But socialists are mistaken when they conflate “corruption and misery” with capitalism. The clown does not define the parade. At the generative end of the spectrum, a business exists to serve people. For these businesses, profits are means, not ends. For example, Southwest’s purpose is “connecting people to what’s important in their lives through friendly, reliable, and low-cost air travel.”

Instead of looking to seize as much of the pie as possible, these businesses look to grow the pie for everyone. They see employees as partners and invest in their flourishing. They realize the pie will grow at the rate their “partners” do. At this end of the spectrum founders design their companies from the outset for individual autonomy and skill mastery, camaraderie and collaboration, and reward the whole team for achieving results. Google is famous for this approach: as one team member said recently, “Google’s culture truly makes workers feel they’re valued and respected as a human being, not as a cog in a machine.”

Generative companies produce trust and reciprocity with employees, customers, and their broader communities. This trust lowers the cost of business and increases profits for everyone – shareholders, team-members, and customers. Just look at Whole Foods, which has been recognized as one of “Fortune’s 100 Best Companies to Work For” every year since the list began in 1998. According to Fortune, the vast majority of team members say the company’s mission aligns with their personal beliefs; 87% of employees there are proud to tell others where they work. These employees are grateful to be a part of a company which has educated countless of Americans on the health and environmental benefits of eating unprocessed and organic foods, fostered demand for new local and organic farms around the U.S., pioneered animal welfare standards, and helped millions of rise out of poverty. The company also rates above 90% for each of the following categories: atmosphere, challenges, rewards, and communication. Of course these ratings don’t happen by accident; Whole Foods is known for investing in team member growth and encouraging team members to seek opportunities that celebrate their individual creativity and potential.

John Mackey, founder and CEO of Whole Foods, was once a critic of business. However after experimenting with socialist grocery concepts, he learned the flaws in his philosophy and started a business. Today John’s mind is made: “In a mere 200 years, business and capitalism have transformed the face of the planet and the complexion of daily life for the vast majority of people.” 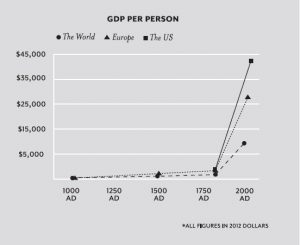 Capitalism’s form and impact are not deterministic. They’re mostly a function of the businesses in the ecosystem. Neither are these companies machines that operate autonomously as destructive or generative agents. They are led and managed by people. Where a company fits on the spectrum depends on the character of its investors, managers, and employees.

It wasn’t until I started a business that I realized I had been wrestling with a false dichotomy. I don’t need to choose between social impact and business-building. As Os Guinness has said, “Contrast is the mother of clarity.” The contrast that helped me was my co-founders. On the destructive and generative spectrum, one of them was on the left and two of them were on the right.

You can think of companies as communities of character; the nature of this character determines the impact it has on society, positive or negative. Cities and nations are basically larger communities of character. When communities are filled with integrity and responsibility, we see human flourishing and rising standards of living as people are freely serving and benefiting each other at scale. As the graph above shows, this is the dominant history of capitalism. But if business people in the United States look for every opportunity to exploit one another, our freedom was wrought in vain. Our liberty is dependent on virtue. If destructive business gets propped up by cronyism, it will obliterate the benefits of capitalism and cause our living standards to fall.

“Only a virtuous people are capable of freedom.” -Benjamin Franklin

Business leaders not only shape society’s view of capitalism, they shape our society itself. At this point in history businesses have more influence than other institutions, such as government, churches, and the academy. After realizing how influential and life-giving business can be, I decided not to pick between social impact and business prosperity. Today I strive to pursue them together. As individuals, businesses, and a society, we can also choose both wellbeing and rising standards of living. Together let’s build character, generative companies, and a flourishing society.

[1] John Mackey and Raj Sisodia elaborate on these ideas in their book, Conscious Capitalism. Their credo is a powerful and inspiring synthesis.

[2] GDP is only one dimension of living standards.  Pursuing GDP growth to the detriment of other measures (e.g. physical health, civic society strength, family vitality) is foolish and unsustainable for many of the same reasons.